I just spent a week back in Los Angeles. The reason? My favorite band in the entire world played a sold-out show at the iconic Greek Theatre in Griffith Park. They also played the following night at The Shrine. Two LANY shows on the west coast in the city they’re based in? There was no way I was missing it. 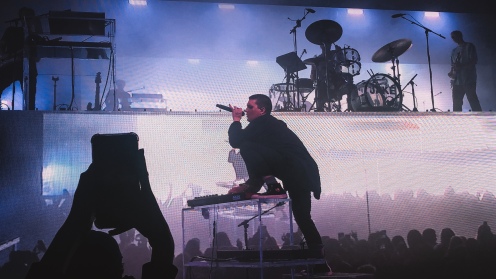 Hometown gigs for your favorite bands hit different. Especially when they are the last two shows of a tour. LANY played 44 shows in North America, and I got to experience four of them. I first saw the Malibu Nights tour in May in Wisconsin and it was two of the best concerts I have ever been to. 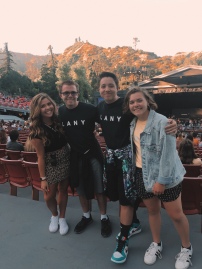 The Greek is beautiful and I’m such a music junkie. I love iconic venues that have such cool history. So many of my favorite bands/artists have had milestone moments in their careers playing theatres like the Greek, and I knew this was going to be a similar case for LANY. It was a dream situation. 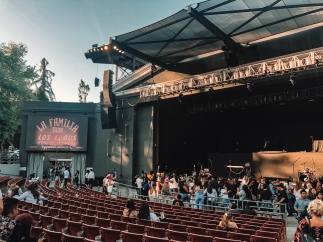 The whole Malibu Nights Tour is stunning. The visuals are artistic. The setlist perfect. The energy unmatched. I can’t believe LANY isn’t playing arenas yet in the states because they are built for it. The way Paul Klein carries the crowd and interacts with them during shows is so refreshing. He clearly is in every moment so intensely. It’s something I admire and appreciate. The enthusiasm for the music being performed is so mutual between the band and the fans during the show–it’s energy I live for.

It was the peak of my fangirl existence to yell the words to Made In Hollywood in actual Hollywood. So many of LANY’s lyrics are inspired by California. It’s where Paul, Jake (drummer) and Les (keys) lived together and built their band.  I loved when Paul shared the story of how they started in LA. “We used to live in a one bedroom apartment on Wilcox and Willoughby, where we wrote our first songs and put them out to zero followers … All we can say is you are the best part of our show, so thanks so much for showing up.”

There were so many moments during the Greek show that I enjoyed. By far one of the best highlights was when Paul ran into the crowd during If You See Her. That man flew up the steps of the Greek to reach the top sections in the back and perform in the audience. It was so exciting to witness.

One of my favorite songs LANY does live this tour is Malibu Nights. I love the emotion poured into it, the lyrics and the piano. (Have to mention–the music video is also so beautiful). It was stunning to get to experience it in an outdoor setting under the sky with hundreds of fans holding up their flashlights.

The Greek show was nothing short of legendary. It was the biggest LANY show I’ve been to, and with almost 6,000 people there the Greek was packed! The outdoor setting was perfect and the band’s performance, like always, was stellar. I loved getting to be a part of such a monumental night in LANY’s career. The show was so good we girls had to do it again for night two in LA at the Shrine.

Processed with VSCO with b3 preset 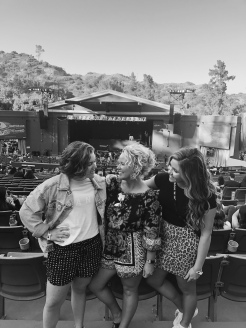 The Greek show was everything, but the show at the Shrine? It was on ANOTHER level.

LANY played the Expo Hall at the Shrine and the acoustics in the room were absolutely incredible. Their sound was MADE for that venue. I was thoroughly impressed and so in awe of the performance from the very moment the band stepped on stage to the moment they bowed in a sea of confetti and left.

In every perfect concert situation, I’d love to be front row or barricade. However, being that we were only in LA for a few days, we decided to get to the show when doors opened versus lining up early for general admission. We love LANY but wanted more time to explore the city. It ended up being perfect though because my gosh, the more you move back in a venue like this, the more you can really hear Paul’s vocals and the crowd singing along with him. It was so loud and LANY sounded so pretty.

This show was the strongest performance I’ve ever seen by LANY. The band could not have been in a better mood and it was so well received by the audience. Everyone was so into the show and the crowd was SO hyped. The excitement and energy in the room couldn’t have been more tangible. 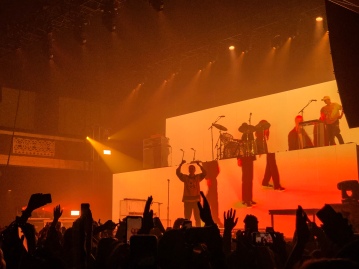 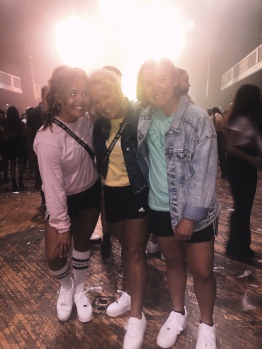 There were so many strong moments during this show. I loved every song but some of my favorites were 4EVER!, Hericane, Super Far, and ILYSB. Paul came into the crowd again during If You See Her and I managed to be a couple rows behind him–it was madness and chaotic but amazing.

We moved around quite a bit during the show and experienced it from different angles. Near the end we got pretty close on the right side and I’m so glad we moved closer because (1) they ended the final night of tour with confetti and (2) Paul Jason Klein looked mighty fine in that LA Kings hockey jersey. LANY is a top tier band. LA is unreal. Jake and Les are awesome, and pjk is one hell of a performer.

I would relive this whole week a hundred times. I love traveling and experiencing live music. There’s nothing like attaching your favorites songs and lyrics to new adventures and moments to remember for the rest of your life. Getting to do this with my family was awesome. I’ll never forget it.

One Reply to “LANY TWICE IN LOS ANGELES”