I met Emblem3 and I couldn’t be happier

First off, let me start this by saying how much I have always wanted to meet a band after their show, immediately after I see them in concert. I have tried sooo many times but it’s never quite happened or turned out how I wanted it to. I have tried waiting after shows, I have tried waiting before shows. I have seen glimpses of them and had my chances of seeing them up close, but never have I had a one-on-one conversation with them or actually hugged them or taken a photo.

There have been times when I’ve found their tour buses, only to learn they’re staying at a hotel for the night so they already left. There have also been times when security has said they should be coming out soon, but it turned into something where they actually wouldn’t be leaving the venue til hours later. I have been so close a number of times, but never have I gotten to simply meet a band after their show during the night of their concert.

BUT, that all changed on May 12, 2016 when I met Emblem3 during their Waking Up Tour. It was a dream come true. Not only have I ALWAYS wanted to meet them, but I also got to like hangout with them outside of their tour buses after their show. It. Was. So. Chill. I was exploding on the inside.

Meeting Emblem3 was just absolutely one of the coolest things ever because I have been following these boys and their music journey since 2012. I watched them four years ago when they were on the x-factor in the USA; I voted for them weekly and was a fan from the beginning. I remember when their audition tape aired on TV for the first time—one moment I was completely mesmerized by these cute boys from California and the next I was online googling them and looking them up on Twitter. My fangirl world had been rocked.

I saw the band perform live for the first time in 2014 with my cousin Becca. It was the first concert we went to together and our first time seeing them perform in person. It was such a fun show and I loved the energy they had onstage. It was contagious. I was hooked.

As you can imagine, meeting them after the show on this tour was a crazy whirlwind of emotions for this girl. My cousin and I were absolutely in shock the entire time it happened and even now I am accepting volunteers to come pinch me because I’m still in denial that it even happened.

It all went down at Varsity Theatre in Minneapolis last Thursday. We were so excited to get there early in the afternoon to line up so we could get a good spot at the general admission show. While we waited in line, we saw Jordan from The Ready Set (the opening act) walk by multiple times as he went to and from their bus and venue. We saw him again after the show and on the way back to our car that night, but we didn’t get the chance to meet him. Like most of my luck with meeting my favorite artists, they’ve always been so close but so far away.

When the doors opened for the concert and we got inside the venue, we were pretty darn close to the stage. We were just a few rows back from the front and the energy inside the building was alive with anticipation for the show to start. Once Emblem3 took the stage, the whole energy inside the venue shifted. Everyone was singing along to the songs at the top of their longs, jumping and dancing. Whenever the guys would come to the end of the stage, girls would rush forward to just have a chance of touching them or holding their hand. It was insane. I loved every moment of it.

The show went by way too quickly. While the boys actually played a long set and performed a great mix of songs from their old and recently released music, it went by too fast. I would have been more than content if they would have played their entire set like two or three times. Ridiculous? Maybe. But I love their energy, stage presence and Californian vibe.

It was awesome to see the boys again. The band broke up shortly after I saw them in 2014 so once they announced they were back together and starting a new tour, I had to be there. Especially with my cousin. We had such a fun time during the show and loved being so close to them. When the show ended and we exited the doors of the venue, we thought we’d stick around for a bit since we knew the band had a show the next night and would hopefully head out to their tour bus to leave town.

There were so many girls outside right after they performed but we knew the chances of meeting them was slightly high, so decided to hangout for a bit. After awhile, the number of fans outside started to dwindle and more of the crew were making their way to and from the bus and concert venue. At that point, we were on a full adrenaline rush and determined to find the boys.

We walked around a little bit, waiting. Our patience actually paid off this time as the boys did leave the venue, right out the front doors. I have never once seen a band just walk out the front doors and greet fans like Emblem3 did that night, and I have been to a lot of concerts. Usually the bands are discreet about it or covered in security, but this time their security and crew were so chill and just let them hangout. E3 took pictures, hugged fans and talked with us.

I met Drew first and hugged him immediately. He came over our way and I right away took a photo with him. After staying by his side for awhile I made my way over to Wesley before they had to head to the bus.

Wesley was so sweet to stop for a moment when he was walking, despite being told to keep going. He gave me a hug and also took a photo. I didn’t get the chance to see Keaton when he was out there the first time, but the night was not over.

The boys went on their bus and Drew and Wesley soon came back outside again to talk to us. We took more photos and just hung out with them. They then went to get food across the street. We noticed Keaton stayed back on the bus so we figured since it was going to be awhile til the other boys would be back, he would most likely come back out, and he did…eventually.

Drew and Wesley came back before Keaton came out. By that time, there was only a small group of us girls left and when we saw him through the bus windows he waved, all smiley and adorable as ever. He finally came outside when there was a group of only like seven of us. He told us he wanted to say hi one last time before they left and then he just chilled with us and talked to us about music, concerts in LA and what they’re like, talked about going to a Walk The Moon concert, the essence of enjoying music during a live show, tattoos, their next music video and just anything we brought up. It was so sweet and he was so nice. He just stood in a circle with us for like 15 minutes, but it felt like forever.

My heart just didn’t know what to do with itself.

Eventually he had to go, their security guy (who is so funny btw) came out to get him and then they were off. He hugged us again before leaving and let me just say does he give the nicest hugs ever. He adorably told me thanks for talking as we hugged and I told him I would hopefully catch another show and come see them again soon. And just like that, he was gone. 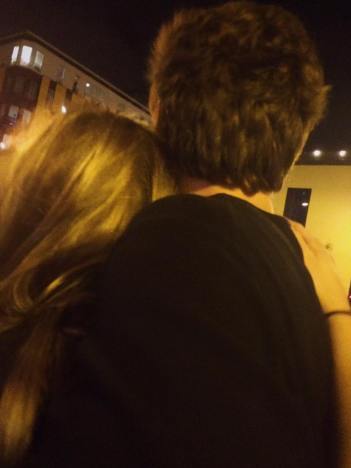 My adorable Keaton, hugging it out with this cutie was my favorite part of the night

I hope to see them again soon…like maybe next week in Chicago?? (MOM, PLEASE?). Their so goofy, sweet, and genuinely adore their fans. I am so happy I finally got to meet them and was able to do so with my favorite cousin who also doubles as one of my best friends. It was the best night ever and definitely the greatest way to kick off my summer. Here’s til next time, E3.