So 5SOS’ Rock Out With Your Socks Out Tour has officially ended, and in honor of that I think it’s about time I post about how much fun it was seeing them this past summer. Life got so crazy near the end of summer that while I had time here and there to blog, I never got to finalize this post and share it. But now finally being settled into college, it’s only fitting that I publish it since the tour is over. Alright, time to reminiscence. :)

First of all, let me just start this out by saying how crazy the last week and a half of July/ first week of August was. I went to four concerts and worked full time. It was a bit insane, yes, but honestly one of the most memorable weeks ever.

On July 26th, I had a One Direction concert in Minneapolis, which was incredible and beyond awesome. I loved seeing those boys again, they never fail to put a smile on my face. Following that I worked full time the entire week. On the Friday after the One Direction concert, I had a 5 Seoncds of Summer (5SOS) concert to hit up in St. Paul. Two concerts planned out within five days of each other. It was a dream come true for this fangirl. But not only did I have those two shows planned out, I also had one comping up six days later to see The Vamps in Minneapolis at First Avenue. It was wild and I was on cloud nine. However, in addition to those shows, another adventure spontaneously came up.

The 5SOS concert in St. Paul was unbelievably perfect. I have never been so entertained throughout an entire show. I also have not ever rocked out as hard as I did when 5SOS performed. I like concerts, a lot, and have pretty much enjoyed every show I have been to; but this concert topped them all. Maybe it was because I was finally seeing my favorite band again, and maybe it was because I was seeing them with my favorite cousins and sister who also love them as much as I do. Whatever it was, I loved how happy I was that night. I loved being able to see the band that brought my cousins and I closer together and I loved being in the same room as those Australian cuties who are even greater in person and play their music even better live.

After a stellar show, the excitement didn’t end because not only did my cousins and I get to see 5SOS perform in St. Paul, but we also spontaneously got to see them again two days later in Chicago. We had such a great time at the concert that we decided, why not see them again? Following a band on tour to a different city is something I’ve always wanted to do, so we figured what better way to end summer than by seeing 5SOS more than once?

Don’t get me wrong, I thoroughly enjoyed the 5SOS St. Paul show. Honestly it was one of the best nights I’ve had in a while. It was so fun to have a night out with my cousins after being so busy working full time over the summer. It was fun to see my favorite band headline their own arena tour and to be there with my favorite cousins that also double as my best friends. It was a great night, and I couldn’t have asked for more. However, the weekend just got better and better. 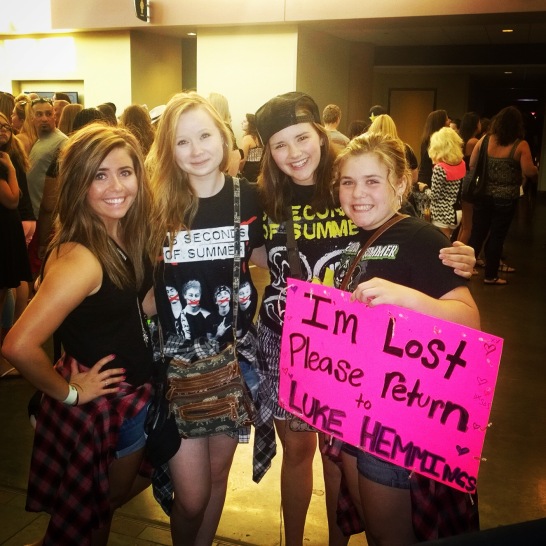 New concert friends are the best. I run a 5SOS St. Paul fan account on twitter that I started a year ago right after I bought my concert tickets because I wanted to talk to people who were going to the show and wanted to follow this tour closely. I’ve met some pretty awesome people through it and it’s been so fun to have people come up to me at concerts asking me if i’m that “5sos” girl, haha

Concert selfies with my cousins, love it. 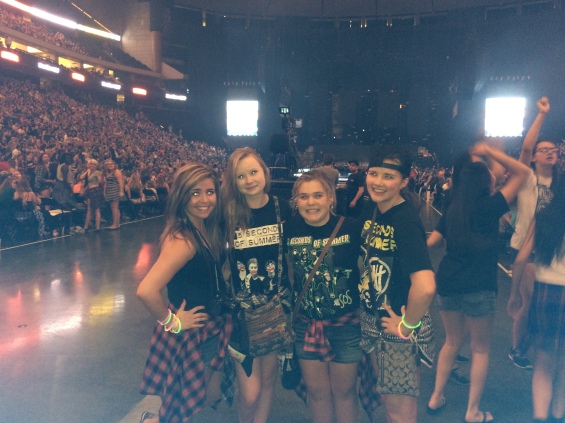 Some of the 5SOS tour merch 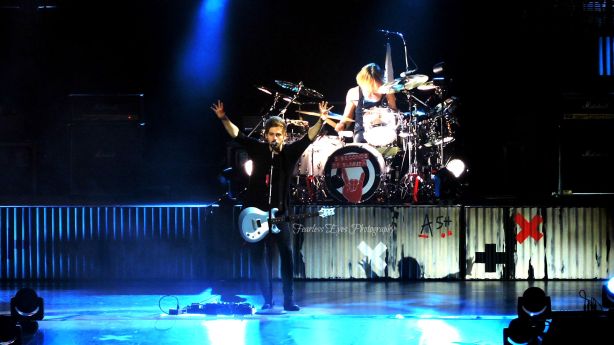 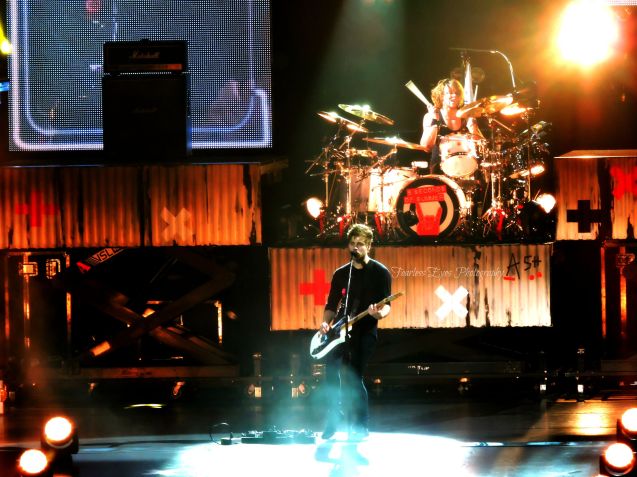 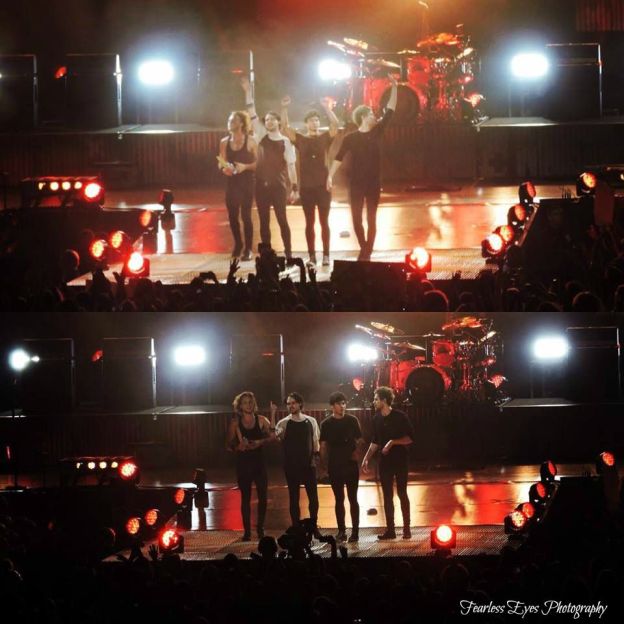 Words cannot express how awesome 5SOS is live. Their music is better, their energy is contagious, and their stage presence is great. From start to finish 5SOS owned the stage, they absolutely killed it with their performance. I loved seeing my favorite songs performed and singing along to every word. I know 5SOS’ music like the back of my hand so it was fun to hear some of their current songs from their latest album, and even a few of their older songs that they had before they released their debut album. The ROWYSO tour was incredible, and I couldn’t have asked for a better experience with better people.

After the concert in St. Paul, before we even left our seats in the arena, we girls talked about how much we wanted to be at their next show. We were like “heck lets just leave and follow them to Chicago for round two.” We weren’t completely serious, I had to work over the weekend so I didn’t think it would work out, but then again I guess we were serious because we ended up spontaneously leaving on a last minute trip to Chicago. I literally got home from the show Friday to find texts from my cousin saying there were still tickets left for the show in Tinley Park (near Chicago). Then the next morning I walked out of work to find more texts from her saying how she was dead set on going, and I was all for it. There was no way I was missing the chance to see another live show. So we talked on the phone and made plans to talk to our parents about it. Shockingly, our moms agreed to take us, so we were off.

We planned the trip as we left. We bought our concert tickets for the show on Sunday night, booked a hotel in the car, and jammed out to 5sos the entire way there. It was a bit crazy, but so fun. I love last minute adventures, especially with these girls. We left Saturday evening and drove through the night.

The entire car ride consisted of endless laughter, talks about our favorite band members and how cute they are, and listening to the 5sos album and LIVESOS over and over. We listened to their music the entire way there, and the entire way back. We eventually arrived to our hotel and got settled in by three in the morning. Even though we made it and were pretty tired out, we could hardly sleep knowing our favorite band was in town and that we were seeing them again in only a few hours. One Direction was also in town (they were spotted at Lollapalooza which was happening in downtown Chicago) so we were hyped to know we were close to them as well. It’s crazy being in the same city as your two all time favorite bands. Although the chances of running into are very slim, it’s still cool knowing how close you are to them.

We started out our first (and only) day in Chicago by sightseeing downtown. It was fun to see Millennium Park. I’ve always wanted to go there so it was fun to cross that off my bucket list and to see the famous Chicago bean. 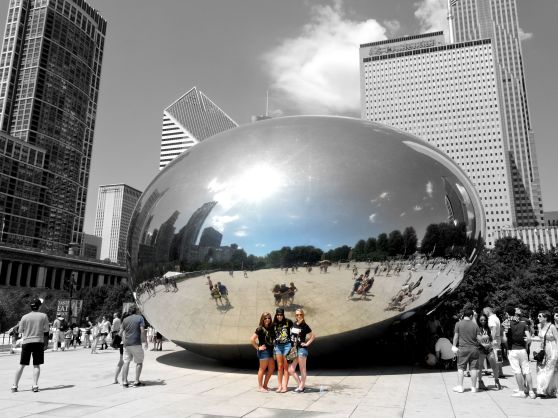 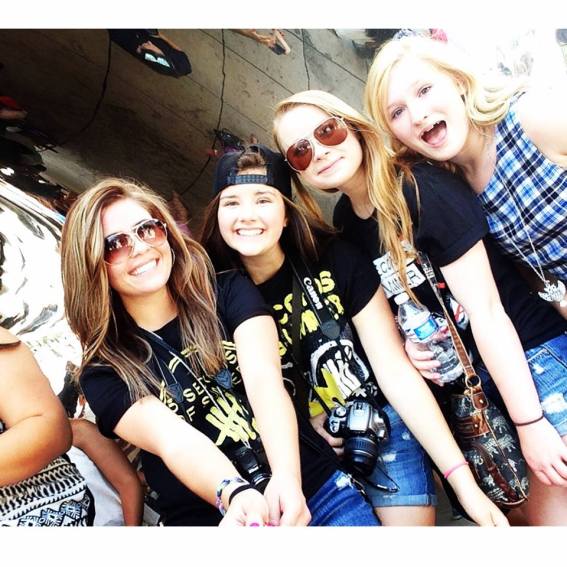 I love that my mom came with on the trip and helped get us there in one piece. It was a wild weekend and I’m glad she decided to come be a part of it. 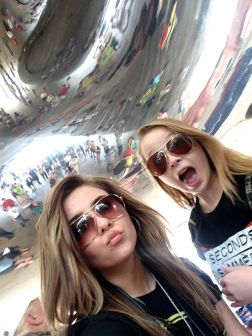 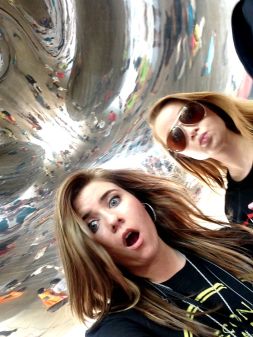 reflections in the bean 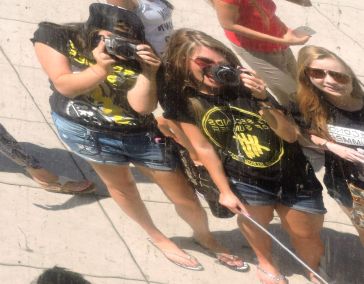 We spent a short time sightseeing in downtown Chicago before we had to head to Tinley Park for the concert. We were so anxious to get to the venue and for the night to unfold. The concert was taking place at the First Midwest Bank Ampitheatre, which is by the way one of the coolest venues I’ve ever been to. The last time I was in Chicago I was there to see 5SOS and 1D perform at Soldier Field, so it was cool to be there again for another concert and to experience it in a venue that was just as awesome. The back of the venue in Tinley Park is open to a lawn area so it partially felt like an outdoor concert. It was the perfect setting for a hot summer day.

We had seats on the floor a few rows back from the stage. Unlike the show in St. Paul, there was no mosh pit so we were really close. We are so lucky to have found as good as seats we did for the price we did, especially because we got the tickets the night before the concert. My cousins and I were practically in tears as we walked to our seats because we were so hyped to be seeing them for a second time and because we got to be much closer this time around. We were already a bit emotional from seeing them on Friday and then of course mixing in the many emotions that come from traveling, exploring, and fangirling all in one short weekend, it definitely made for a unbelievably memorable night.

My favorite concert girls who also double as my cousins and best friends. I’m so thankful to have these girls in my life and for all the fun memories we got to make over the summer with each other. We went to a lot of concerts and made it a summer to remember.

Night two of ROWYSO was even better than the first. I’m so happy we were able to see 5SOS perform twice. I loved being so close to them and being able to make eye contact with them. It’s fun to see them up close and to be fully emerged in the show. My cousins and I rocked out even harder then we did in St. Paul.  It’s crazy how big of fan girls we are and how much we freak out when we talk about them. You can only imagine what its like when we see them in person. We could hardly breathe or function. When the guys would hit certain notes or do note changes, we would freak out because we couldn’t contain ourselves or the excitement. Lol yeah, it was a bit crazy.

I still can’t believe we pulled off such a fun weekend. It was crazy but also incredible. I made great memories with my cousins and we loved following our favorite band on tour. I love adventures, spontaneity, concerts, and 5SOS, so it was the best combination. I still laugh when I think about how the night unfolded and how much we rocked out to the music. 5SOS puts on such an incredible show that is consistently moving and entertaining. I wish I could’ve captured more of the night with my camera but security had strict rules that didn’t permit us to bring them in. But because of that I was also able to experience the concert to the fullest, so maybe that was for the best. :) 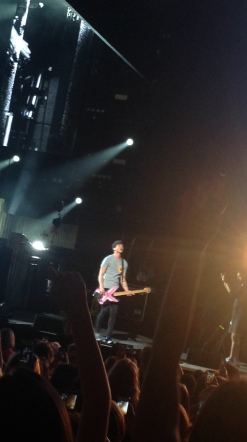 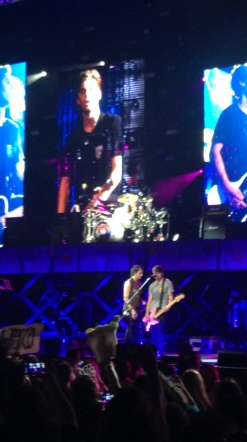 The whole trip consisted of endless goofy selfies, continuous laughter, and fun memories made with my cousins. I’m so glad I got to take this trip with them, it was one to remember and one I already miss so much. I can’t wait for our next concert and the next time we can all see 5SOS in concert again.

Not to mention that I’m totally having concert withdrawals as 5SOS releases new music. I miss our concert weekend so much and I miss Luke Hemmings terribly. But now I have a new album and eventually a new tour to look forward to. ROWYSO was unbelievable, here’s to one awesome tour down and to all the future ones that I can’t wait to attend.